While all national parks went through tough times due to COVID-19, Waterton Lakes National Park in southwestern Alberta had to contend with a double whammy.

The pandemic struck while it was still rebuilding after the massive Kenow Fire of 2017 that burned more than one-third of the park. The townsite was spared, barely, but the fire destroyed roads, trails, and the Crandell Mountain Campground. Sections of the park gradually reopened as restoration took place, but it was the recent reopening of two top attractions — the Bear’s Hump Hike and the Red Rock Parkway — that made it feel as if things were returning to normal, or as close to normal as we can expect these days.

The Bear’s Hump is among the most spectacular short hikes in the Rockies. The name comes from the shape of the mountain resembling the hump on a grizzly bear. The 2.8-kilometre return walk is a steep, steady climb with an elevation gain of 225 metres. All the huffing and puffing seems worthwhile when we reach the top and enjoy breathtaking views over the townsite, scenic lakes, and mountains beyond.

The 15-kilometre Red Rock Parkway leads to famous Red Rock Canyon with pinkish-red hues so vibrant that they look unreal. Short trails line each side of the colourful canyon while another kilometre-long path leads to Blakiston Falls.

Hiking is a major draw, with trails from easy strolls to more serious backcountry treks. Cycling, horseback trail riding, wildlife viewing, canoeing, and kayaking round out some of the more popular activities. The guided boat trip along Upper Waterton Lake has recently resumed, although the trip is a bit shorter than before the pandemic.

The park is mostly about enjoying the awesome landscapes. A unique aspect is that the prairie comes right up to the mountains, with no foothills as in other parts of the Rockies.

Waterton has been designated an International Dark Sky Park. To capitalize on this, long-time resident Keith Robinson, along with his three brothers, started Dark Sky Guides to help visitors enjoy what the night sky has to offer. We joined one of Keith’s trips, starting at 10:30 p.m. with a drive to Red Rock Canyon, then a walk to Blakiston Falls. The goal was to be where it was totally dark, well away from any light pollution. 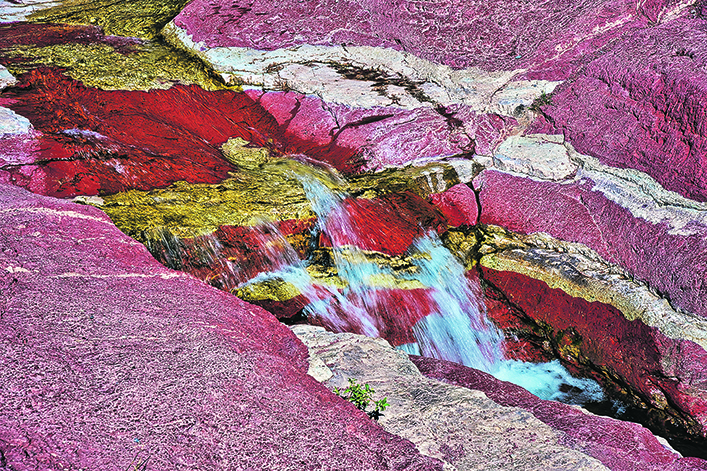 At the falls we turned off our headlamps, the only light coming from the millions of stars overhead glowing with an intensity we seldom see. Robinson related stories of stars, planets, and constellations, occasionally pointing out features with his special laser light that looked as if it could reach the heavens. Many stories have local origins such as the Blackfoot legend of how the Big Dipper came to be. Rather than simply looking at the stars, Robinson showed us how to better appreciate and understand what we were seeing.

Waterton townsite is small and low-key. Yet it has everything visitors need including eateries from take-out to fine dining and accommodation from simple to swanky, plus a large campground. Topping the swanky scale is the iconic Prince of Wales Hotel, a majestic railway hotel built in 1927 and perched on a hilltop with one of the most magnificent views in Canada.

A few things still weren’t open during our mid-August visit, such as the Akamina Parkway, a scenic road leading to Cameron Lake. However, reconstruction was near completion. There are plans to rebuild Crandell Mountain Campground along the Red Rock Parkway, although this will be a longer project. 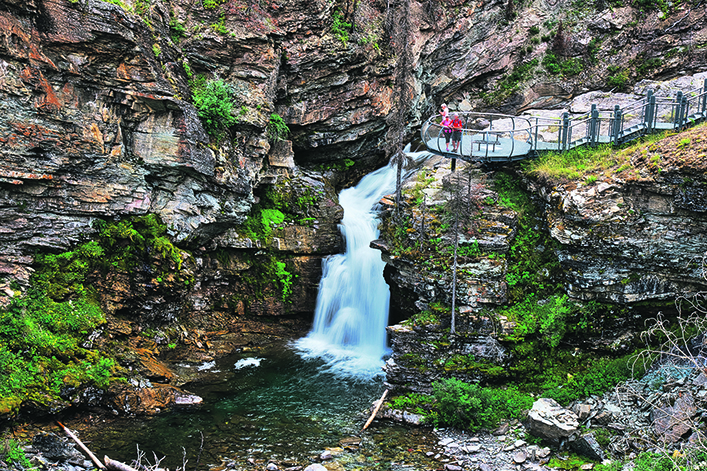 Blakiston Falls is worth the hike. | Arlene & Robin Karpan photo

The border closure with the United States has had a big effect. Waterton is next to Glacier National Park in Montana and is part of the Waterton-Glacier International Peace Park. The normally steady cross-border traffic is now gone.

The most obvious change since the fire is the number of dead trees, although the undergrowth is greening up even faster than experts anticipated. During our visit, brilliant stands of fireweed carpeted large parts of the previously burned forest.

Waterton has long been famous for having the top wildflower displays in the country, especially in spring and early summer. Frequent visitors to the park told us that since the fire, the flowers are even better.

For more information, check out the Waterton Lakes National Park website at www.mywaterton.ca

Arlene and Robin Karpan are well-travelled writers based in Saskatoon. Contact: travel@producer.com.